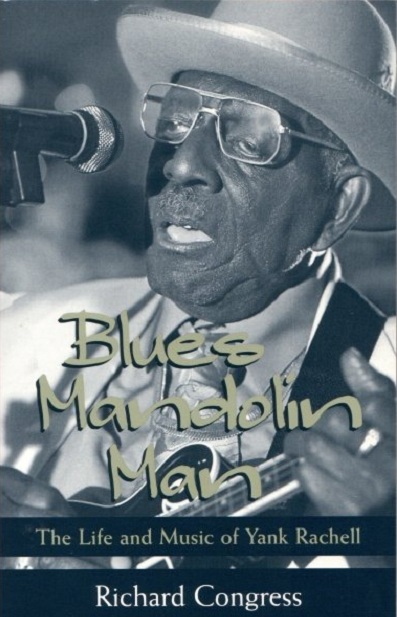 The first biography of a blues maker who kept "country blues" and jug-band style alive - Foreword By David Evans.

Yank Rachell and his mandolin playing style moved every musician lucky enough to hear him perform in the early sixties. When he died in April 1997, he left behind a stack of unanswered requests to tour Europe and to play blues festivals in the United States.

In Blues Mandolin Man: The Life and Music of Yank Rachell, Richard Congress delivers the first biography of a family man whose playing inspired and energized the likes of David Honeyboy Edwards, Sleepy John Estes, and Henry Townsend. No other biography discusses the mandolin's influence and role in the blues.

Guitar great Ry Cooder said, "Yank's style fascinated me because it had a lot of power and it's very raw-and what a great thing to do, just attack this little instrument like that."

Charlie Musselwhite, the noted harp player, worked with Rachell and club hopped in Chicago with the elder bluesman. "He just had a great spirit about him," Musselwhite said of Rachell's playing and singing, "really just shouting it out. If the world was made up of people like Yank Rachell it would be a wonderful place to live."

Blues Mandolin Man chronicles the life, times, and music of a man who was born into a family of sharecroppers in 1910 in rural western Tennessee. An active musician for 75 years, Rachell mastered several musical instruments and first recorded for Victor in Memphis in 1929. Through the blues, Rachell's world expanded to include Chicago, New York, recording studios and, after the sixties, radio, TV, and national and European tours.

Yank's recollections reveal new information about personalities and events that will delight blues history buffs. Rich appendixes detail Yank's mandolin and guitar style and his place in the blues tradition.

For this book Richard Congress, who reissued two of Rachell's old LPs in CD format, worked closely with him to record memories spanning decades of blues playing. Congress tells a compelling and engaging story about a colorful and thoughtful character who as a child picked cotton and plowed a field behind a mule, who grew to manhood coping with the southern Jim Crow system, and who participated in the creation and perpetuation of the blues.

Richard Congress is the owner of Random Chance Records, a record company based in New York City.

Photo of Yank Rachell by Patrick Schnieder, courtesy of the Indianapolis Star Tribune.