One of the world's foremost pianists and composers 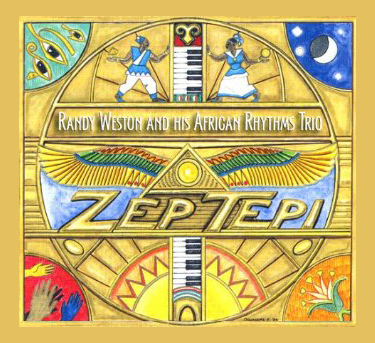 Jazz pianist Randy Weston will mark his 80th birthday in 2006. To celebrate, he has released Zep Tepi (the translation into English is "First Time," which is the name of the ancient Egyptian creation story). This CD is also Weston's first trio recording in decades. Performing with Weston are Alex Blake on bass and Neil Clarke on African percussion. The ten compositons on this recording range from Weston's well known compositions like "Blue Moses," to new works such as "Ballad For T" and "Tamashii." Random Chance Records is honored to be able to present this great CD to the public.

This track is from Random Chance release Zep Tepi, Randy Weston and his African Rhythms Trio. Issued in 2006 to celebrate Weston's 80th birthday, it has been recognized as an important album from this legendary pianist and pioneer in North African rooted jazz.

"When Randy Weston plays a combination of strength and gentleness virility and velvet emerges from the keys in an ebb and flow of sound seemingly as natural as the waves of the sea."

After contributing five decades of musical direction and genius, Randy Weston remains one of the world's foremost pianists and composers today, a true innovator and visionary. Encompassing the vast rhythmic heritage of Africa, his global creations musically continue to inform and inspire. "Weston has the biggest sound of any jazz pianist since Ellington and Monk, as well as the richest most inventive beat," states jazz critic Stanley Crouch, "but his art is more than projection and time; it's the result of a studious and inspired intelligence...an intelligence that is creating a fresh synthesis of African elements with jazz technique".

Randy Weston, born in Brooklyn, New York in 1926, didn't have to travel far to hear the early jazz giants that were to influence him. Though Weston cites Count Basie, Nat King Cole, Art Tatum, and of course, Duke Ellington as his other piano heroes, it was Monk who had the greatest impact. "He was the most original I ever heard," Weston remembers. "He played like they must have played in Egypt 5000 years ago."Randy Weston’s first recording as a leader came in 1954 on Riverside Records, Randy Weston plays Cole Porter - Cole Porter in a modern mood. It was in the 50's when Randy Weston played around New York with Cecil Payne and Kenny Dorham that he wrote many of his best loved tunes, "Saucer Eyes," "Pam's Waltz," "Little Niles," and, "Hi-Fly." His greatest hit, "Hi-Fly," Weston (who is 6' 8") says, is a "tale of being my height and looking down at the ground.

Randy Weston has never failed to make the connections between African and American music. His dedication is due in large part to his father, Frank Edward Weston, who told his son that he was, "an African born in America." "He told me I had to learn about myself and about him and about my grandparents," Weston said in an interview, "and the only way to do it was I'd have to go back to the motherland one day."

In the late 60's, Weston left the country. But instead of moving to Europe like so many of his contemporaries, Weston went to Africa. Though he settled in Morocco, he traveled throughout the continent tasting the musical fruits of other nations. One of his most memorable experiences was the 1977 Nigerian festival, which drew artists from 60 cultures. "At the end," Weston says, "we all realized that our music was different but the same, because if you take out the African elements of bossa nova, samba, jazz, blues, you have nothing... To me, it's Mother Africa's way of surviving in the new world."