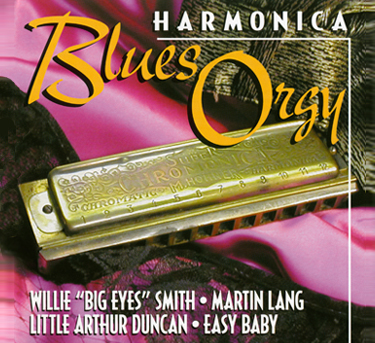 In the wake of the pioneering harp work and hit records by the great Little Walter Jacobs in the early 1950s, aspiring bluesmen took up the harp in droves. During the prime years of Chicago Blues, the sound that defined the era was that of a wailing amplified harp leading a couple of electric guitars played through low powered tube amps turned up to the edge of distortion, and a drummer busily bashing out the beat behind them. Ask the old timers who were there, and they'll tell you that if a blues band didn't have a harp player, they didn't have a gig in Chicago.

More about the album

Even musicians whose styles might have seemed ill-suited to harmonica accompaniment - front line string benders like guitarist Otis Rush, rock & roll pioneer Bo Diddley, popular Chicago doo woppers The Coronets, even the sophisticated king of the electric blues guitar, T-Bone Walker - sometimes played or recorded with a harmonica player during the mid '50s. Because harmonicas were cheap, plentiful, and relatively easy to play, many musicians who went on to become known for other talents picked up the rudiments of the harmonica early on, and there were many more harp players who never graduated to other instruments, or professional careers. There was no shortage of good harp players in Chicago in the '50s - chances were if you threw a harp into any crowd on the south or west sides of the city in those days, it would hit at least one person who could play the hell out if it before it ever touched the ground. Those days are gone. Rock and Roll, Rhythm and Blues, sweet soul music, Motown, and a thousand other changes in music and popular tastes put harmonica players out of business by the dozens. Nowadays the harmonica takes a distant back seat to the electric guitar in most blues music in Chicago, and the number of harp players who have any connection back to the heyday of Chicago Blues is dwindling by the year. But there are still a handful of holdouts who remember when the blues harp was king, or are devoted enough to the have put in the requisite years studying with the masters. These are players with the chops to take a listener back to those glory days...

is known to blues fans around the world as the man who kept the blues beat with the Muddy Waters band for the better part of two decades, as the drummer for the patriarch of Chicago Blues. Muddy employed some of the very best blues harp players ever to pick up the instrument over the years, and Willie was right behind most of them soaking it all up. He took an even greater interest than most other drummers would have, since the harmonica was Willie's first instrument, and one that he'd always maintained an interest in even when he wasn't playing it professionally. Willie made his first recordings on the harp backing down-home bluesman Big Boy Spires c. 1954/'55, but these recordings were not issued at the time. He also played some harp with the aforementioned Bo Diddley around this time, including a session with for Chess in 1955 that featured some nice (if poorly recorded) blowing on Bo's "Diddy Wah Diddy". But these were the waning days of blues harp supremacy in Chicago, and in order to keep working, by the late '50s Willie made the switch to drums and joined Muddy's band. Willie's own music is strongly influenced by Muddy and the various harp players he employed over the years; on "Read Way Back", Willie captured the swing of Little Walter's chromatic harp work from Muddy's original recording. The imprint of Little Walter is evident on Willie's other song choices here as well; "Blues With A Feeling" was one of Walter's early hits, and "You're The One" (captured as an impromptu studio jam at the end of the session) is borrowed from a Jimmy Rogers record on which Walter also played. Willie also pays tribute to his old friend Junior Wells with a cover of "Hoodoo Man Blues", and then goes all the way back to his earliest harp hero, John Lee "Sonny Boy #1" Williamson for a cover of "Sugar Mama."

Little Arthur Duncan was there in the '50s, watching and listening to all the greats, absorbing the sounds and picking up the fine points along the way, but he never performed music as a full-time pursuit. Instead he worked a different angle of the entertainment business, running a bar/nightclub on the West Side for number of years. He kept his hand in the music though, and could be counted on to step out from behind the bar to sit in with the band and blow a few rough and ready tunes whenever the mood struck him. In recent years Arthur has been getting more work in clubs (other than his own) and on the festival circuit; the cuts presented here were recorded at a club in Chicago in 1999.

Martin Lang is the youngest harp man here, but is no less traditional in his style of playing. At the age of 29, Martin has spent half his life playing and studying the music of the Chicago Blues masters. Not only has he paid his dues in the south and west side clubs, he's also played with and learned directly from many of the veterans who were part of the Chicago blues harp scene in the 1950s. Here he's supported by one of the men who was there are the birth of that scene, the guitarist on some of Little Walter's greatest recordings, Dave Myers. Thanks to the rock-solid and sympathetic support, Martin beautifully captures the swinging phrasing and rolling rhythms that are the essence of the classic Chicago style.

Alec "Easy Baby" Randle has been periodically active on the Chicago blues since the 1950s, but has been sparsely recorded over the years. Unlike the other players here, his harmonica playing is not rooted solely in the classic Chicago style of the '50s - his playing is influenced by Rice "Sonny Boy #2" Miller and other southern-based players, as well as gospel music and more. He also shows his knack for personalized, original material; "Room 309" really is his apartment number. These days he's just as likely to be heard playing gospel music in church with his harmonica ashe is to be heard playing in a blues club, something he's justly proud of. An additional benefit of his work in the church is that his vocals have stayed in tip-top shape even during his absences from the blues scene, as he ably demonstrates here.

The backing musicians on this CD represent the cream of the crop of traditional Chicago blues players spanning at least three generations, from young players like guitarists Rockin' Johnny Burgin and Eddie Taylor, Jr. (whose father played on an LP by Easy Baby in the 1970s) who are barely out of their 20s, through Dave Myers, who has been playing blues professionally for over 50 years. Most of the musicians here have played with one another in various combinations many times over the years, all brought together by their devotion to the deep sounds of the traditional Chicago Blues sound.

So sit back and enjoy a trip back in a blues time machine to the days when, in the words of legendary blues piano man Otis Spann, "The harmonica [was] the mother of the band."
- Scott Dirks