Another master of the vibraphone 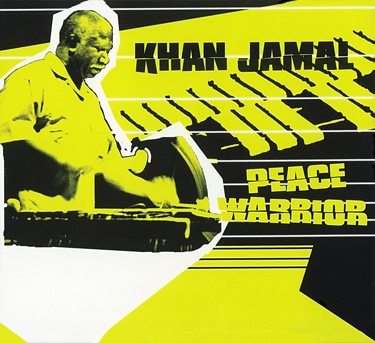 When one thinks of the masters of the vibraphone, seven names come immediately to mind: Lionel Hampton, Red Norvo, Milt Jackson, Terry Gibbs, Cal Tjader, Gary Burton and Bobby Hutcherson. Khan Jamal, who has always been greatly underrated, has a style touched by that of Hampton, Jackson and Hutcherson but he has had his own approach since emerging in the late 1970s.
Read more below...

Jamal was born July 23, 1946 in Jacksonville, Florida, briefly played piano and sax, and began on the vibes in 1964. After serving in the military, he studied at the Granoff School Of Music and gained experience playing with Cosmic Forces and such avant-garde greats as trumpeter Ted Daniel, drummer Sunny Murray, tenor-saxophonist David Murray, violinist Billy Bang and Ronald Shannon Jackson's Decoding Society plus his own stimulating groups.

At the time that he recorded the music on this CD in 1989 (with the last three numbers from 1982), the 43-year old Jamal was at the peak of his creative powers. The first two of his eight originals, "Don't Take No" and "Scandinavian Dawn," are unusual in that Jamal played the KAT midi percussion synth controller which makes him sound like his own orchestra. The interplay between Jamal and guitarist Monnett Sudler is a highlight of the eccentric-sounding "Don't Take No" while Sudler takes the melodic lead on the lyrical "Scandinavian Dawn."

Jamal plays the vibes on the remainder of the set. "Peaceful Warrior" is a catchy vamp that has solo space for Sudler and Jamal, with keyboardist Mark Kramer, bassist Warren Oree and drummer Dwight James keeping the groove moving. "One For Hamp," a tribute to Lionel Hampton, shows how much playing can take place over one chord when musicians are on this level. The collective improvising swings hard, just as Hampton always did.

Three For All" has a complex melody that launches one of Jamal's finest solos of the program. "Hip Out" was inspired initially by the rhythms of rap but also uses a variety of overlapping melodies, unpredictable polyrhythms and Oree's driving walking bass. Wrapping up the 1989 session is "Body And Soul" which is given a conventional and pleasing interpretation.

On the first of the three selections from 1982, Byard Lancaster's flute blends well with Jamal's vibes during the catchy vamp piece "Nubian Queen." The attractive Jamal ballad "Lovely Afternoon" (which shows off his roots in Milt Jackson) has excellent solos by the vibist and pianist Bernard Sammul while "The Angry Young Man" is a hyper jam for the rhythm section.

Although he was off records during the first half of the 1990s, Khan Jamal was active in the Philadelphia area, and his recent recordings show that he has retained both his musical skills and his highly individual style up to the present time. Peace Warrior remains one of his finest recordings.