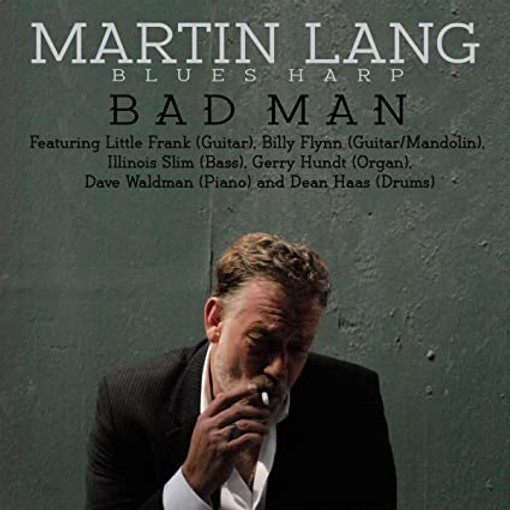 In a city renowned for the blues, especially the type featuring harmonica as a lead instrument, the standard by which all others are judged remains the electric ensemble style first perfected by Muddy Waters in the early ‘50s. It’s a sound that’s instantly recognizable: moody and sexy, soaked in rhythm and grit. Once bitten by this music, it’s a sound that’s impossible to forget. Thanks to Martin Lang and a cast of Chicago's finest sidemen, Random Chance Records’ Bad Man insures that the electric blues, played the Chicago way, is in masterful hands. From its opening harmonica lick, Bad Man is a playful excursion into the bosom of the electric blues, with harp man and bad man Martin Lang holding court.

Lang seems at first to be an unlikely frontman. One of only a handful of Chicago harmonica players credibly called “studio musicians,” Lang has made a career holed up in the shadows of others, most notably Taildragger (James Yancey Jones), Dave Myers and Rockin’ Johnny Burgin. But it’s his uncommonly melodic, soulful harp playing that propels Lang’s ascendancy to band leader. Indeed, with a cast of characters like Billy Flynn and Little Frank on guitars and mandolin, Illinois Slim on bass and Dean Hass on drums, Bad Man is a true sideman’s revenge! Any one of these guys could take a turn in the spotlight and call it their own, but when the session’s done, there is only one real bad man, and that’s Martin. He’s a Bad Man and he’ll travel.

At its core, Bad Man is a primer in the Chicago electric blues, where the ensemble is much more than the sum of its parts. It’s a selfless style of music, each player supporting the other, all serving the greater good. With Lang acting as ringmaster, the songs swagger with the aura of Little Walter’s ghost, the melodies and tempos frisky, lively and full of fun, There’s not a bad trip or morose sentiment to be found here. The CD’s opening track “Reefer Head Man” is an exuberant ode to smoking weed, with no remorse whatsoever. When Lang sings “I smoke more reefer than King Kong can,” there’s no doubt at all. He means it, and all is well; go ahead and bogart that joint, brother, we have more. What his voice lacks in technical prowess, it more than makes up with its West-Side bravado and fortitude. Both “Younger Days” and the title track, “Bad Man” find Lang laying his heartfelt soul into the material; it’s authentic and comfortable, like a favorite hat or hash pipe.

Bad Man is percolated with upbeat and swinging instrumentals with hat-tips to Earl Hooker and Robert Lockwood a plenty. “Juicy Lucy” is pure South Side grease, close your eyes and take a midnight stroll with that muffin top mama in the tight dress! Adding to the late night party feel of Bad Man is the presence of Dave Waldman on piano and Gerry Hundt on plastic Farfisa organ. With Waldman conjuring up the spirit of Otis Spann and Hundt banging out the greasiest Chicago organ short of Barrelhouse Chuck, Bad Man delivers a boogie that won’t let go.

From a historical standpoint, it’s a treat to have Waldman and Lang on the same recording, as without Waldman, there may not be a Lang. A man on deep background, Dave Waldman is known (by those in the “know”) the world over for his virtuosity on the harmonica, and one who was an indispensable mentor to Martin in his formative years while both were students at University of Chicago. But it’s not their brains were here for, it’s the sublime and masterful harmonica playing. Lang is one of only a handful of guys who actually plays the damn thing like an instrument. His melodic sense and dynamic ability elevate his harp playing from a textural rhythmic device to a lead instrument in the truest sense of the word. Every note has a purpose and none are wasted. In Lang’s hands the harp is tighter than a top and looser than a goose. The man can flat-out play!

Bad Man’s success is in no small measure due to the production and stewardship of Dick Shurman. Arranging and recording the Chess ensemble style of blues is an art; each instrument needs its own space and position in the mix, and frankly, needs to be recorded live. The players are all parts of a greater whole, none being the star, all being indispensable. The guitars weave and dodge around each other, the bass and drums simmer but never boil over, the keys take turns dancing in time, all the while Lang’s superb harp sizzles and wails in the foreground. Shurman’s sure hand behind the console and his keen ear for the perfect mood insure that Bad Man is one of the most completely authentic Chicago Blues recordings to emerge in years.

Most highly recommended for novices and aficionados alike!

This review appears in chicagobluesguide.com/post/martin-lang-bad-man

Read more about the music here and buy it on Amazon