Signature songs of Blakey and the Jazz Messengers 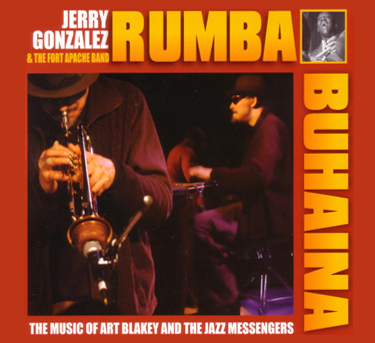 It has been many years since the last Fort Apache CD release when they played the music of Thelonious Monk on Rumba Para Monk. To his friends and collegues Art Blakey, the great jazz drummer and leader of The Jazz Messengers, was known as Buhaina. With this CD the Fort Apache band does it's own arrangements of some of the signature songs of Blakey and the Jazz Messengers. There is no other band that sounds like Fort Apache. While Latin jazz has become quite popular and there are many new releases of this genre of music, Gerry Gonzalez's Fort Apache band, which is one of the longest running jazz groups in the world, has a unique fusion of jazz and Latin music, they just reach deeper, have more street smarts and just plain play better than anyone else. Trumpet and congas, Jerry Gonzalez, Saxaphones, Joe Ford, Piano, Larry Willlis, Bass, Andy Gonzalez drums, Steve Barrios.

Track from Rumba Buhaina, by Jerry Gonzalez and the Fort Apache Band. This is one of the longest lasting latin jazz combos. This album is a tribute to drummer Art Blakey, latin style.
Do you like this post?
Tweet