With Howard Glazer & the EL34s 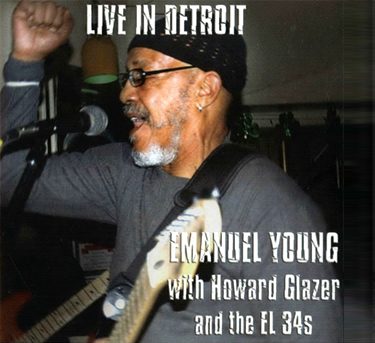 Emanuel Young is a living Detroit legend, whether holding court at his apartment, just a short distance away from the Motown Museum or keeping the blues alive at a few legendary juke joints around the city, Emanuel is one of Detroit’s best kept secrets. He has played with some of the best in the business while developing a style all his own. Emanuel Young picked up the guitar at the end of the nineteen fifties and has not put it down since. Emanuel is a walking, talking textbook of Detroit’s history and has played with many of the well-know musician’s that have graced the Motor-City with their talent, including John Lee Hooker (1 ½ years), Martha Reeves, Jimmy Reed, Albert King, and Mr. Bo to name a few. Holding down what has to be one of the longest runs in Detroit music history Emanuel hosted the blues night at Cooley’s Lounge on Detroit’s far east side from 1978 until it closed in 2005. Emanuel’s most recent recording, "Live In Detroit" was recorded at The Halligan Bar, a local watering hole for the Detroit Fire Fighters. Emanuel is backed by the powerful line up of Howard Glazer and the EL 34s.

With his old school blues rhythms and a fifties sense of melody, Emanuel shines, for any blues or Detroit music aficionado this man is a must see! For booking contact: [email protected].

A track from Live in Detroit.


Howard Glazer accompanies himself on this multi-tracked Random Chance Records single. "They call it the patriot act but how can a patriot act this was..." Lyrics by Rick Congress.
Do you like this post?
Tweet