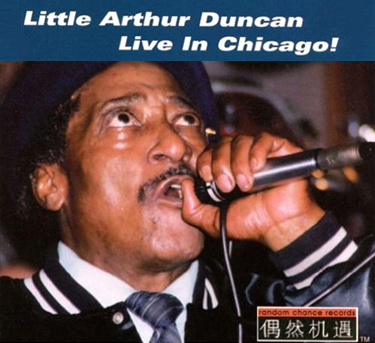 Random Chance Records is proud to present the first live album of Little Arthur Duncan. It took less than a minute's worth of listening to the master CD sent to me by producer and musician Karl Meyer to know this was going to be our next release. I love this music. Little Arthur Duncan is another link in the chain of real Chicago blues: gritty, compelling, smokey, whiskey-breathed, and intense. Enjoy it!

A track from Live in Chicago.

Little Arthur Duncan's blues are infectious. As he sings, Arthur throws his head back, allowing pure emotion to escape his soul and penetrate his audience. He bounces up and down with the microphone firmly clenched in one hand, drawing inspiration from the sweat on his own brow. When he plays the blues harp, he contorts his entire body to draw out every note. He is a dynamic and energetic performer. Ten minutes into his show, you'll agree: he's an original.

Arthur Duncan was born in Indianola, Mississippi, in 1934. He was raised on the Woodburn Plantation, where B.B. King grew up. Arthur began his musical career as a drummer, but after he moved to Chicago in 1950, he met Little Walter and took up the harmonica. For a while during the 1950s, Arthur shared a house with Little Walter and Jimmy Reed. During these years Arthur sang and played in blues clubs all over Chicago. Most of the time he had his own band, but often he would work with artists such as Hip Linkchain, John Brim, and Floyd Jones.

Throughout the 1960s and 1970s Arthur worked construction jobs during the week, and played blues around Chicago on weekends. By the 1989s he was working regularly as some of Chicago's premier blues clubs, including Kingston Mines, Rosa's, B.L.U.E.S. on Halstead, and Lilly's. In 1989 he recorded an album called Bad Reputation for Blues King Records.

Problems with Arthur's teeth kept him from performing during the early 1990s. But in 1998 he acquired a whole new set of pearly whites, and he has returned to the blues scene with a vengeance. This was particularly good timing for Little Arthur, since Cannonball Records released four tracks from Bad Reputation on their CD titled Blues Across America—The Chicago Scene.

There has been increasing recognition of Little Arthur Duncan's importance as an exponent of Chicago blues. Real Blues magazine ran a series of articles on him and about the nightclub he owned at one time (issues number 16, Dec. '98/ Jan. '99 and 17, Feb/March '99.

Now he is scheduled to go on his first European tour in October of 2000. Don't miss a chance to hear an original bluesman carrying on the great Chicago blues tradition.
—Karl A. Meyer

...Harp player and singer Little Arthur Duncan is one of those unsung underground blues artists who has been a resident of Chicago since 1950, he also had a role as a club owner on the west side of the city...churning rhythms from the band and a high register shouting vocal style, with considerable harp technique are Duncan's style.
—Mike Stevenson, Blues and Rhythm, April, 1998

...Little Arthur Duncan is a throwback to the old-school of Chicago blues...Duncan is a fair harp-player in a technical sense, but an authentic bluesman with lots of soul in his performance. Influenced by Slim Harpo and Jimmy Reed, the two most influential stars of the 1950s and the 1960s, and there's also a big dose of Howlin' Wolf in his playing as well.
—Andy Grigg, Real Blues, June/July 1998.